By The Madison GroupNo Comments

This case study examines why a plastic lawn mower wheel hub failed while in service, and shows why time-dependent properties need to be considered when designing plastic parts. Figure 1 shows a lawn mower wheel that is attached to a metal drive gear for a self-propelled lawn mower. The plastic hub was manufactured from a polyethylene material. The metal gear is attached to the wheel via three metal rivets that press into posts on the hub, Figure 2. After about 7 years in service, the lawn mower wheel failed at the posts, causing the metal drive gear to separate from the plastic hub, Figure 3. This analysis included a visual inspection of the hub plus an FEA structural analysis. 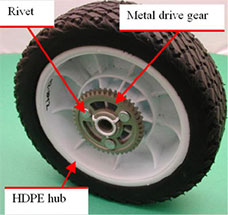 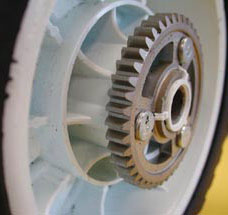 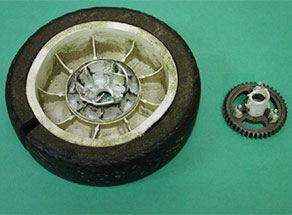 Examining the failed hub revealed axial cracks present on the mounting posts, Figure 4. A crack with this orientation suggests that failure was caused by hoop stress. The source of hoop stress in this case was the interference fit of the metal rivet and the plastic mounting post. Performing a structural analysis on the wheel revealed the stress was concentrated on the top of the posts, Figure 5. However, the analysis also showed that the interference fit produced a stress that remained below the yield stress of the material. Even though the stress is below the listed yield stress found on the material data sheet, this does not necessarily mean that the plastic part will not fail. Plastics experience a phenomenon called creep when subjected to a constant load. Over time, the plastic molecules move and disentangle in an attempt to relieve this applied load. As the material disentangles, the part becomes more compliant, leading to slow crack growth and eventual catastrophic failure. In this case, the constant load is a result of the interference fit. Examining creep data for polyethylene revealed that at this stress level the plastic posts would be expected to fail after about eight years of service, Figure 6. 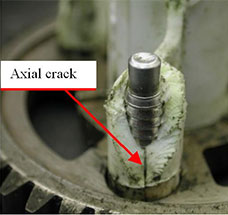 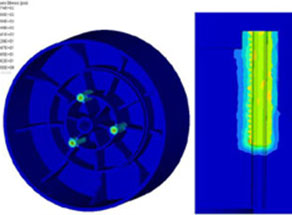 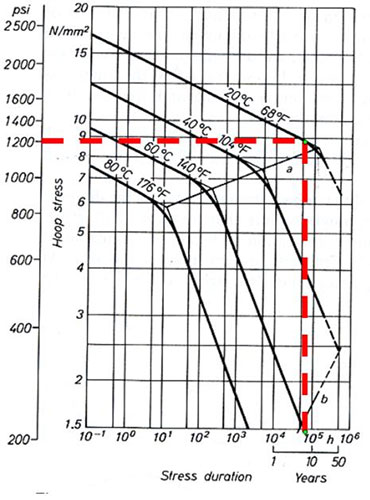