A client submitted a molded part that was produced by a competitor of theirs, that demonstrated an excellent balance of stiffness, strength, and wear properties. They requested that an analysis be performed to characterize the composition of the material. As is usual is such reverse engineering analyses, the first test conducted was Fourier transform infrared spectroscopy (FTIR). The obtained FTIR spectrum exhibited absorption bands indicative of a thermoplastic polyester, such as poly(ethylene terephthalate) (PET) or poly(butylene terephthalate) (PBT). Given the similarity in structure, such materials cannot be differentiated specially, and a melting point is used to distinguish them. Additional, weak but distinct, bands were present consistent with eh presence of a fluoropolymer, such as polytetrafluoroethylene (PTFE). 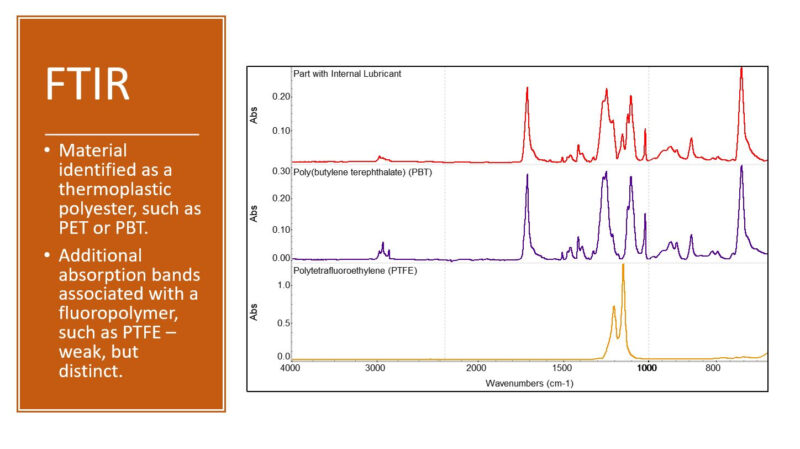 The material was then analyzed using differential scanning calorimetry (DSC). The second heating thermogram showed a primary bimodal endotherm, with an identified melting point of 224 °C.  This was characteristic of PBT. A second endotherm was also present in the results. A melting point of 325 °C was determined, indicative of PTFE. 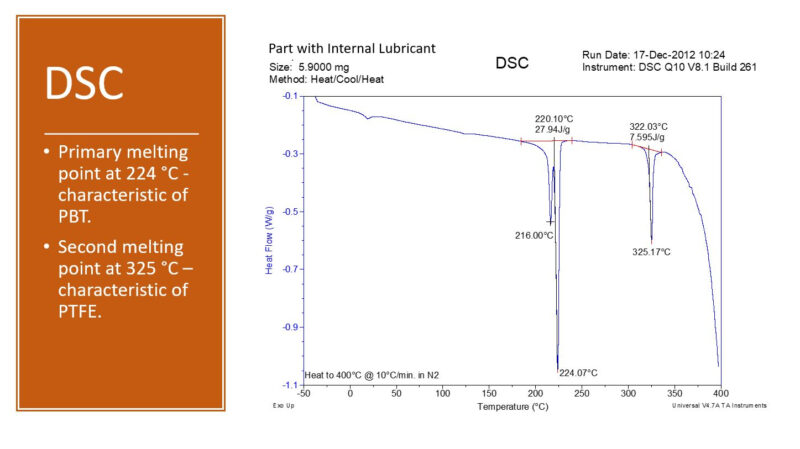 Subsequently, the material was analyzed using thermogravimetric analysis (TGA). The obtained weight loss profile showed a major weight loss under the dynamic nitrogen purge of 52%, centered at 418 °C. This was associated with the thermal decomposition of the PBT. Continued heating resulted in a weight loss of 15% at 572 °C. This represented the PTFE decomposition. At the completion of the analysis, a non-combusted residue content of 29% remained. A visual examination showed this residue to be principally present as glass. 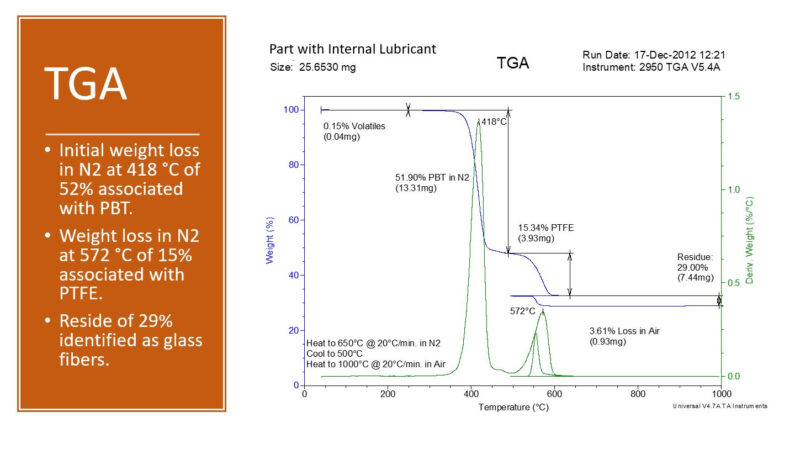 Given the entirety of the analysis results, the unknown material was identified as a PBT resin formulated with 30% glass fiber reinforcement, and 15% PTFE as an internal wear lubricant.

For more information about how polytetrafluoroethylene (PTFE) reduces friction and wear in molded plastic parts, check out this other post: PTFE Additive Reduces Abrasive Wear