Thermogravimetric analysis (TGA) is a common thermal analysis technique that provides composition information for polymeric materials. Most often, we associate TGA with quantitative data. However, I was reminded during a recent material analysis that TGA can also provide insight into qualitative analysis.

I was analyzing a rubber O-ring. My first test, as usual, was Fourier transform infrared spectroscopy (FTIR). The FTIR indicated that the material was a nitrile rubber (NBR) (Buna-N) compound. Additional absorption bands associated with silicate-based mineral clay were also present. Weak bands indicated an ester-based plasticizer.  The general form of the spectrum was suggestive of a moderate loading of carbon black.

I conducted the TGA analysis, and found all the expected weight loss events for the quantification of the plasticizer, polymer, and carbon black, as well as the residue for the mineral filler  However, one additional weight loss stood out. A weight loss of 4.4% centered at approximately 280 °C. The temperature and relatively sharp nature of the weight loss was characteristic of dehydrohalogenation – in this case, the evolution of HCl from poly(vinyl chloride) (PVC). PVC is often added to NBR rubber compounds to modify the mechanical properties of the rubber and to increase the ozone resistance and improve the weathering resistance. NBR is fully compatible with plasticized PVC and can be compounded together to produce homogenous blends with superior properties. 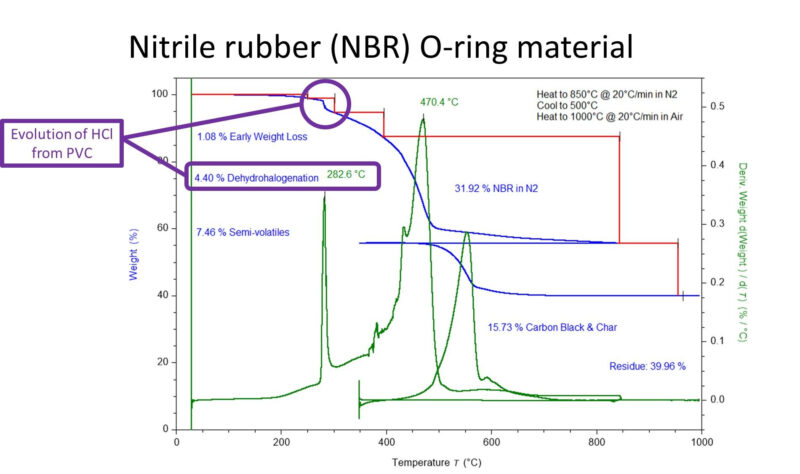 TGA thermogram showing a weight loss associated with dehydrohalogenation of PVC in the NBR rubber.

Normally, it would be expected that spectral bands associated with PVC would be identifiable in the FTIR spectrum. However, in this case, there is no sign of the PVC in the results. I think that the PVC concentration is too low, and the bands representing the silicate filler obscure some of the spectral region.  The TGA was the technique that identified the presence of the PVC.

It should be noted that an absolute quantification using the TGA is not possible in this case. When the PVC decomposes in the TGA, hydrochloric acid (HCl) is generated. The HCl can react with some mineral fillers, including silicate-based minerals, such as those identified in the O-ring.  Additionally, PVC pyrolyzes in two stages, first the dehydrohalogenation and then at higher temperature the decomposition of the remaining hydrocarbon polymer backbone. In this circumstance, the 4.4% weight loss attributed to the PVC dehydrohalogenation can be used to approximate the level of PVC formulated into the NBR. The molecular weights of PVC repeating unit, C2H3Cl and the evolved HCl can be used in a stoichiometric calculation. This indicates a total PVC content of 7.6%, with the “other” 3.2% remaining as the hydrocarbon structure which decomposes in the TGA at elevated temperature. After accounting for the NBR char, I estimate 7.6% / 20 phr PVC in the NBR formulation. This is not exact, but would provide a rubber compounder a place to start to optimize the formulation.