Analyzing the inside of an enclosed assembled plastic part is a formidable task without the use of invasive or destructive methods. Invasive and destructive analysis can alter the part by deforming walls or seals and still may not reveal the true state of the part prior to sectioning. Computed Tomography (CT) imaging has been used in the medical field for many years to analyze the fine details of the internal structure of the human body. This article will review the advantages and limitations of CT imaging and how The Madison Group is using this technology to analyze plastic parts.

What is CT Imaging?

CT imaging delivers a full 3D image of a part that can be electronically sliced and oriented at any location. To do this, thousands of X-rays are taken of the part as it is rotated. The Xrays penetrate the part as a digital detector receives the image. Software reassembles the images into a full 3D model that is very similar to a solid “CAD” model. The engineer now has a digital model of the actual assembly that shows extraordinary detail.

The Madison Group uses CT imaging for the many benefits it provides when analyzing a plastic part/assembly. Perhaps most importantly, it does not require the part to be disassembled or sectioned. In almost all cases no preparation is required. The part is simply held in place using standard polystyrene foam during the scanning process. 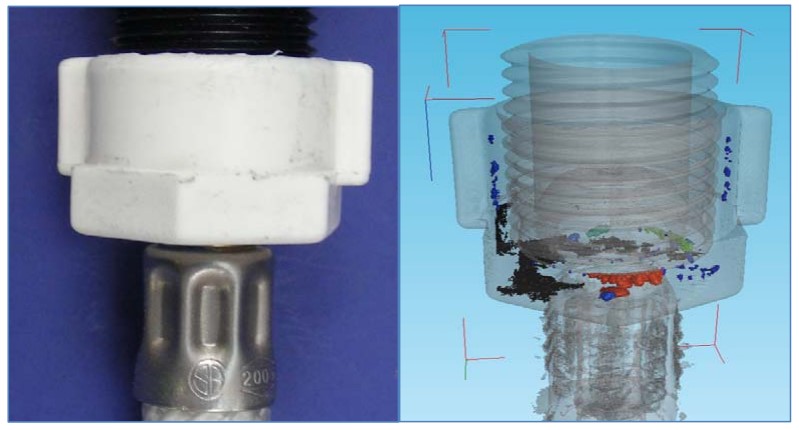 Once scanned, the 3D model can be cross-sectioned at any angle at any location on the part. With digital slicing the actual assembled state can be viewed. The internal geometry, properly seated gaskets, engaged gears, even internal parts that have become loose, can be examined. CT imaging assists with metrology and reverse engineer a part/assembly. It is an accurate tool to help investigate the cause and origin of failure.

At The Madison Group, we frequently see internal manufacturing defects such as voids during destructive testing. Voids in the plastic can be easily detected with CT imaging. Because the part is not altered, the size and number of voids is quantifiable. Figure 1 shows an assembly of a plastic threaded coupling nut to a male threaded stem. Figure 1 right image shows the CT image of the assembly with the parts shown in a transparent mode. The colored spherical regions represent voids in the coupling that are automatically detected by the imaging software. The voids in this part are numerous and occupy a significant area of the part indicating possible processing issues and structural deficiencies.

Part-to-part or part-to-CAD model comparison is becoming increasing popular as a quality control technique. This allows one to determine if a part is changing over time from manufacturing or in service in its intended environment.

Though CT imaging continues to evolve at a dramatic rate, there are a number of limitations. CT imaging essentially works on differences in density. Materials that are extremely dense, i.e. fasteners made of heavier metals, can be difficult to scan when incorporated into plastic parts. These materials can create a “sunning effect” which produces a bright spot in the image. Since the amount of metal used in plastic parts is typically low, this effect is usually minor. Nevertheless, advances in technology are allowing metal and plastics to be scanned with increasingly better results.

Depending on the system being used, there is a size limit to the part. Currently, parts/assemblies up to approximately 15 inches long and 10 inches in diameter can be scanned. However, the resolution of the scan decreases as the area of interest increases. Thus, a balance needs to be maintained by the engineer on resolution and size of region to be scanned.

Analysis of a Toilet Valve

Perhaps one of the more complex parts in your house is the valve that controls the water flow into your toilet basin. This valve has very fine channels that must be molded properly and free of debris to work correctly. Figure 2a shows a common toilet valve and Figure 2b shows a cross-section/mount. The valve contains numerous parts including various rubber seals and a metal pin that must precisely assembled to work properly. The mount gives a 2-dimensional cross-sectional view of the complexity that is involved. To view another location a different part and mount would need to be created. 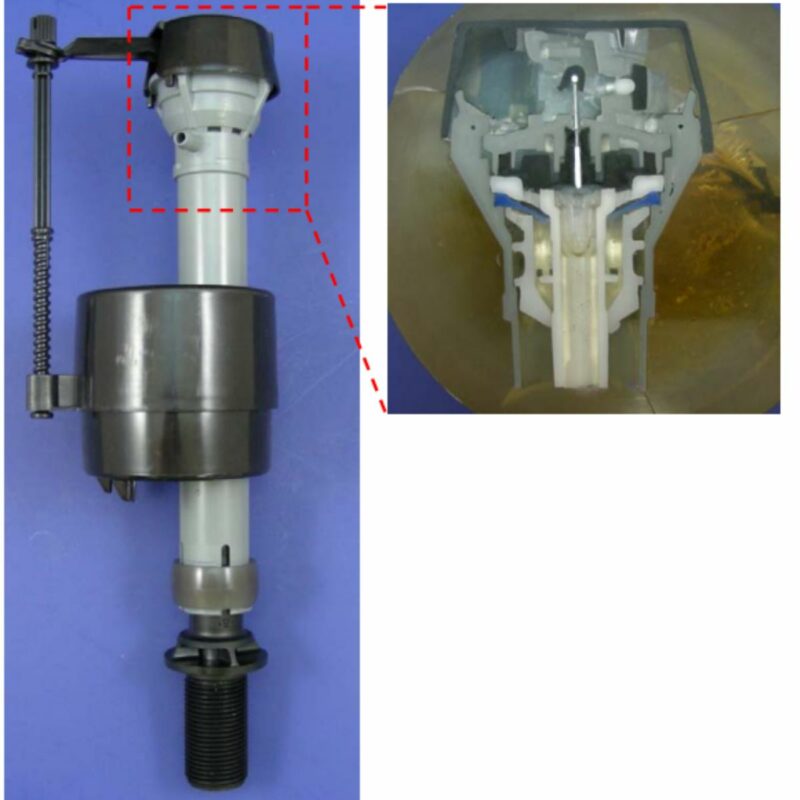 Using CT imaging this valve could be scanned without alteration. Once scanned, any 2-dimensional cross-section can be made, Figure 3. The location of the gaskets and other components can be examined very easily. Measurements can be made. Voids can be located and counted. The resolution of CT imaging is even high enough to detect part serial numbers or company logos, Figure 4. One caveat is the lack of color differentiation between parts that one would get with a cross-section and mount. 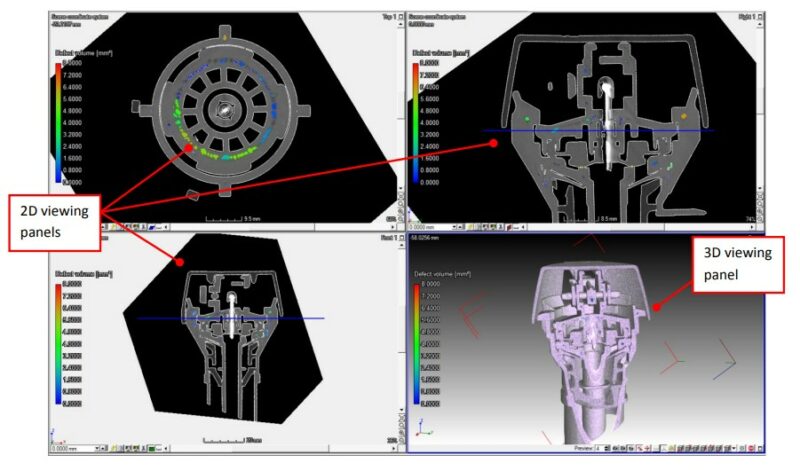 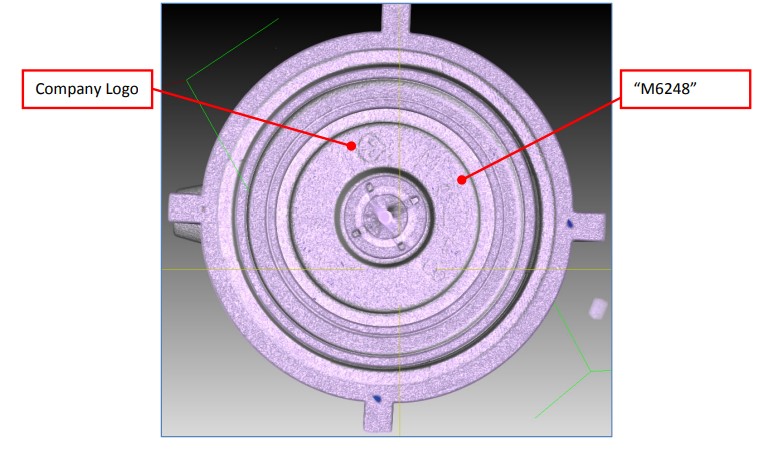 Analyzing the Assembly of Plastic Pipes

The assembly of poly(vinyl chloride) (PVC) or chlorinated poly(vinyl chloride) (CPVC) pipes and joints commonly includes a cement that solvates the two surfaces to be assembled. If done correctly, once the solvent evaporates, a strong homogenous joint is created. Figure 5 shows a CPVC pipe and elbow that were part of a larger water distribution system. Water was discovered leaking from the joint. Using CT imaging the extent of cracking and the amount of cement were examined. Figure 6 shows the assembly with a portion of the elbow digitally removed. Numerous cracks in the pipe and the quantity of cement can be seen in Figure 7. 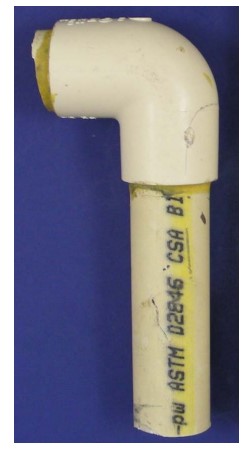 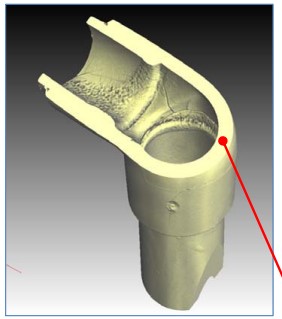 Figure 6 – CT image of a plastic pipe assembly with the digital slicing of the
plastic elbow. 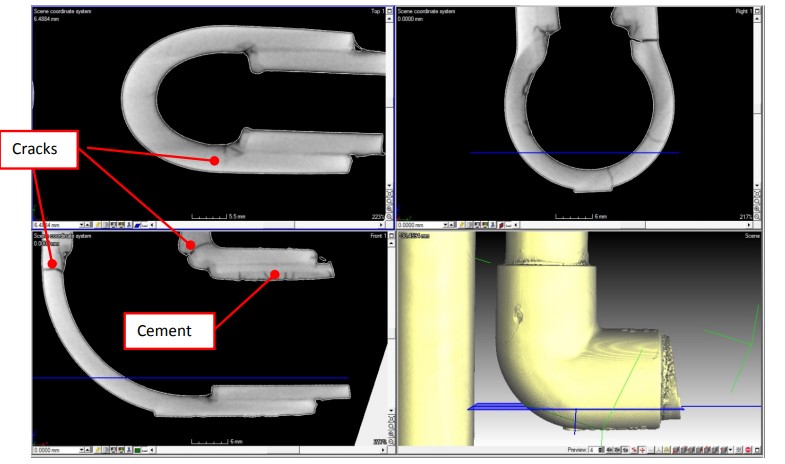 CT imaging is a powerful tool for analyzing the internal geometry without the need to modify the part. After an initial scan, the engineer has a 3D model that can be digitally sliced at any location allowing for metrology, void detection, form and fit of internal parts, among many other capabilities. The technique is being used successfully at The Madison Group for design verification, failure analysis and quality control. It is predicted that CT imaging will become as common as the scanning electron microscope when analyzing plastic parts.

Paul Gramann is one of the founders and current President of The Madison Group. Dr. Gramann received his Ph.D. from the University of Wisconsin – Madison where he served as an adjunct professor within the Mechanical Engineering Department. He is dedicated to design verifications and failure analysis of thermoplastic, elastomeric and thermoset parts. His expert testimony has been invaluable in numerous depositions and trials for both defense and plaintiff counsels.