In nucleated polymers, including polypropylene, the addition of formulation additives, increases the rate of crystallization. Specifically, crystallization occurs earlier as the material cools during processing. Correspondingly, the crystallization also occurs at a faster rate. This results in smaller crystalline spherulite structures with a significantly higher concentration. There are two basic types of nucleating agents:

Polypropylene is generally recognized as a relatively easy polymer to nucleate. This is attributed to the rate of crystalline structure formation, which is slow enough to allow the nucleating agent to have a significant impact.

Nucleating agents are often used with a polypropylene resin as their addition allows for decreased cooling time of the polymer, and as such shorter cycle times. Additionally, nucleating agents can help to reduce warpage and produce more uniform shrinkage within the molded part due to the smaller, but more dense spherulite crystalline structure. 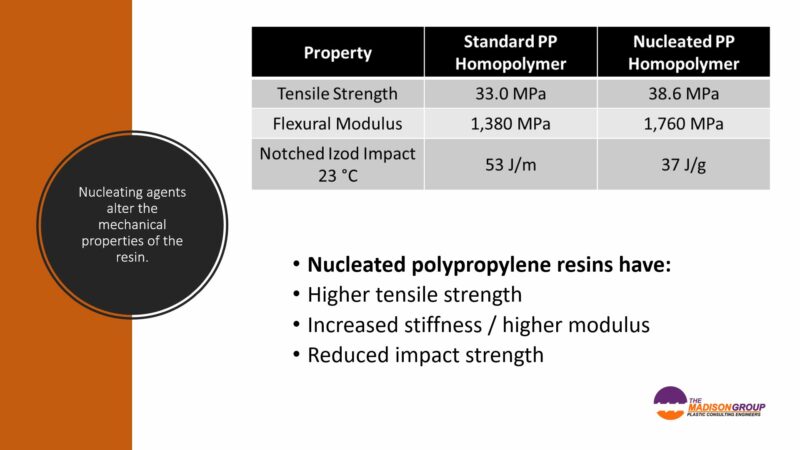 A specific type of nucleating agent is called a clarifier. Generally, clarifiers provide even smaller crystalline spherulites that scanner less light. This resulted in a greater level of transparency and improved clarity.

Nucleating agents can be identified through differential scanning calorimetry, particularly as a noted increase in the recrystallization temperature.