I worked on the failure of a plastic connector, which illustrates the violation of a fundamental design rule. A pipe assembly, consisting of two poly(vinyl chloride) (PVC) plastic pipe sections, a brass hose bibb, and a PVC Tee-connector had failed shortly after the installation.

The visual and microscopic examinations revealed cracking within the Tee-connector. The cracking was oriented longitudinally to the threaded outlet of the tee associated with the brass hose bibb. The longitudinal cracking indicated failure associated with internal forces. Internal stress, such as interference loading or pressurization, produces a longitudinal crack as a result of the hoop stress present in a cylinder, such as the Tee. No signs of macro-ductility, stress whitening or permanent deformation, were apparent. Conversely, the cracking showed features, including bifurcation, characteristic of brittle failure.

The examination showed damage on the exterior of the Tee-connector at the outlet associated with the brass hose bibb extending the circumference of the fitting, consistent with the use of a tool used during assembly of the hose bibb into the Tee-connector. 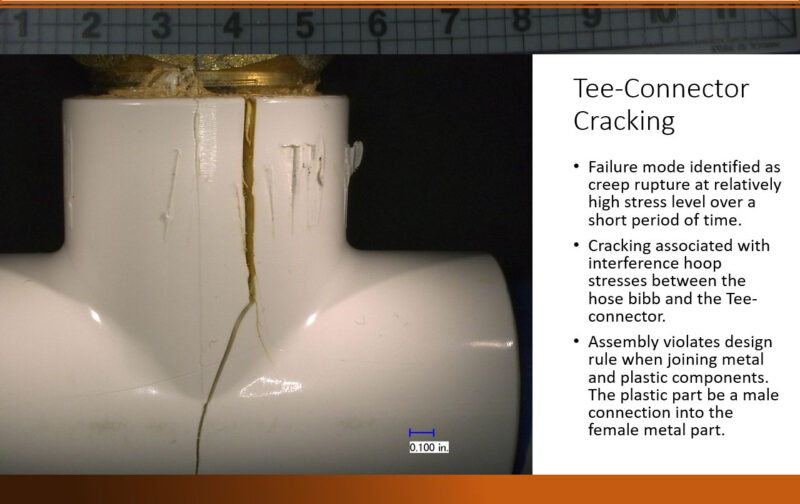 Based upon the observations, the failure occurred as a result of stresses within the Tee-connector that exceeded the PVC’s long-term strength leading to plastic creep, slow crack growth, and ultimately creep rupture. The Tee-connector displayed features consistent with failure associated with relatively high stresses, approaching yield, exerted over a comparatively short period of time.

Additionally, the design of the assembly violates a basic plastic design rule when joining metal and plastic components. Because of the relative material strengths and the differential in coefficient of thermal expansion/contraction, this type of assembly should be made such that the plastic part be a male connection into the female metal part. This is also stated in ASTM F 1498. This was not done in making this connection between the brass hose bibb and the PVC fitting, and is thought to be a major factor in the PVC Tee-connector failure.