Failures occurred within threaded fasteners used in an outdoor industrial application. Specifically, cracking was observed within fasteners used to terminate a pipe conveying a gaseous chemical product. The parts had been installed leak-free, as verified through leak testing. However, failures occurred within some of the installations between four and five years, as identified by leakage of the gaseous product. A failure analysis identified that some of the fasteners had cracked though a mechanical short-term overload mechanism in which the stresses applied during installation exceeded the short-term strength of the material. Other parts, however, cracked through creep rupture, whereby the applied service stress exceeded the long-term strength of the material. In both cases, crack propagation and ultimate rupture were associated with the creep properties of the material. A material conversion was considered to increase the creep performance of the fasteners. This paper will review the testing performed to characterize and compare the creep performance of the incumbent and proposed materials.

Leakage failure resulting from cracking had been observed within threaded fasteners. The fasteners had been used in hot and dry conditions in above-ground outdoor service in the Southwestern United States, functioning to terminate pipes conveying a gaseous chemical product. The failures were observed after four to five years of service. Leak testing of the pipe/fastener assembly shortly after installation did not reveal any signs of leakage.

A failure analysis was conducted, which identified two different modes of failure. Some of the part failures initiated though a mechanical short-term overload mechanism in which the stresses applied during installation exceeded the short-term strength of the material. Other field failures as well as engineering test parts cracked through creep rupture, whereby the applied stress exceeded the long-term strength of the material. In both cases, crack propagation and ultimate catastrophic splitting was associated with the creep rupture.

The fasteners had been produced from Celcon® M90, a general-purpose, medium viscosity polyacetal copolymer from Celanese Corporation, containing a black colorant. A material review was conducted, and a potential replacement material was identified, Poketone® M630, an unfilled, general-purpose aliphatic polyketone terpolymer from Hyosung Chemical Corporation.

A creep evaluation was subsequently conducted to compare the long-term properties of the two materials. This study included:

This paper will review that comparative creep evaluation. 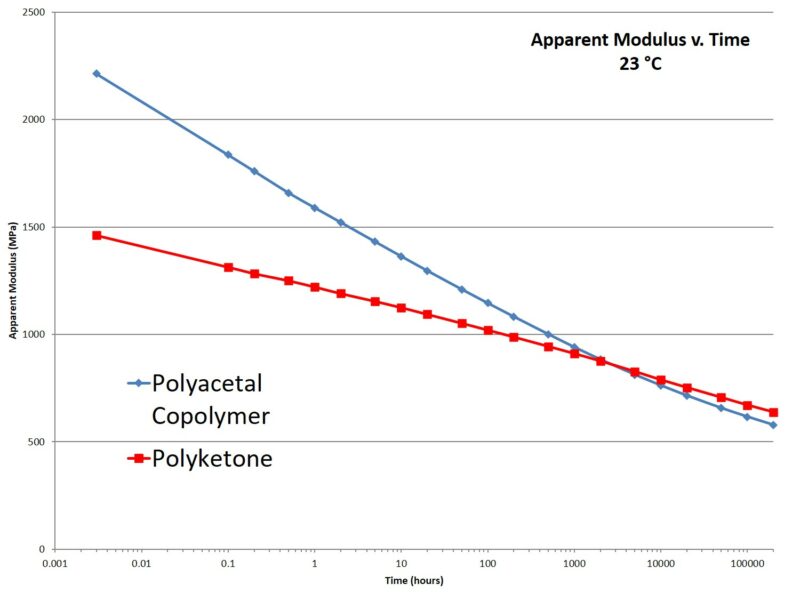 Overlay of the creep master curves for the polyacetal and polyketone materials.