This paper was originally published and presented at The Society of Plastics Engineers’ ANTEC in 2020.

Cracking occurred within the housing for a piece of weather monitoring instrumentation being used as part of a field service trial. The cracking was observed within the bosses used to secure the housing section to the mounting hardware. The focus of this investigation was the determination of the nature and cause of the failure. The results obtained during the evaluation of the failed housing indicated that the cracking occurred through three separate mechanisms. Significant factors in the failure included aspects of design, manufacturing, and the service conditions. This paper will review the testing performed to characterize the failure modes and identify the causes of the cracking, while demonstrating the analytical procedures used in the investigation. 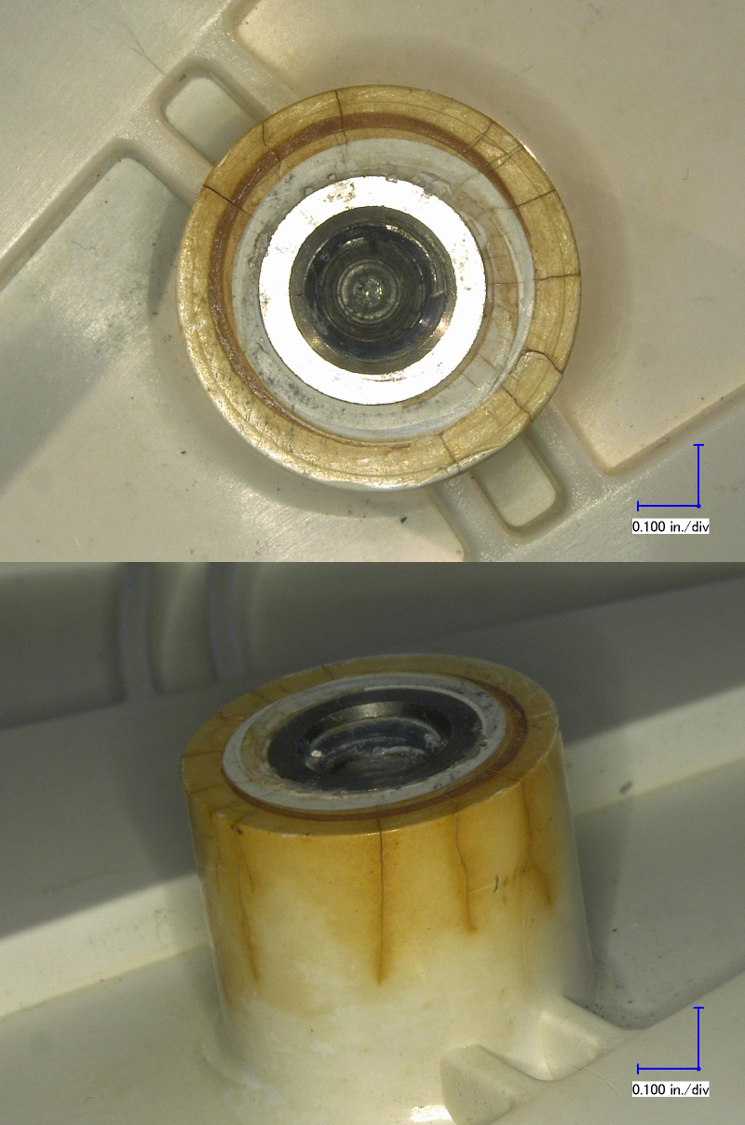 Photomicrographs showing typical cracking and discoloration within one of the housing bosses. No significant macro ductility is evident.

An instrument housing failed while being used as part of an extended field service product evaluation. Specifically, the failed unit had been installed outdoors at a coastal location within the Southeastern United States. Periodic routine inspection had identified cracking within bosses associated with hardware used to mount the housing to the mating bracket. Previous limited laboratory lifetime assessment had been completed without an indication of cracking or other indications of failure.

The housing had been injection molded from an unfilled, flame retardant, UV stabilized, weather resistant grade of polycarbonate / poly(acrylonitrile:styrene:acrylate) (PC+ASA). The material had a melt flow rate specification of 20 g/10 min. to 40 g/10 min. under the test conditions of  260 °C and 5 kg. The housing material was over-molded onto stainless steel profiled threaded inserts.

After molding, the individual housing sections were assembled with the internal electrical components. The completed assembly was subsequently connected onto a mating bracket with metal hardware including M6 screws fastened into the over-molded stainless steel inserts. The screws were coated with Loctite® 243 adhesive. Nylon inserts were used on both sides of the bracket, and the bracket was secured to a mounting pole. Coaxial cable was then attached and vulcanizing tape applied.

In addition to the failed housing, an as-molded housing, which had never been in service or tested, was also received for comparison purposes. A typical sample of the molding resin was also submitted as a reference. Further, typical mounting hardware was also obtained.

A failure analysis was conducted to identify the nature and cause of the instrument housing failure.  The evaluation included:

It was the conclusion of the investigation that the cracking within the housing bosses occurred through three different brittle fracture slow crack initiation and propagation mechanisms. The most prevalent cracking was associated with interference stresses between the molded-in metal inserts and the over-molded bosses. The failures occurred through creep rupture, a brittle fracture, slow crack growth mechanism. Creep rupture occurs via the exertion of stress over a period of time that exceeds the long-term strength of the material. This stress is most often well below the yield point of the material. Oftentimes, such stress occurs within plastic molded over metal inserts as a result of the differential in coefficient of thermal contraction between the plastic and the metal. The over-molded plastic shrinks to a much greater degree than the metal insert during cooling as part of and after injection molding, producing interference stress.

Additional cracking within the bosses resulted from the presence of poorly fused knit lines. Knit lines are produced through the union of two flow fronts extending around design features, such as the boss, during the injection molding process. Knit lines can represent localized areas of reduced mechanical integrity if the molecules at the flow fronts are not adequately entangled upon solidification. The knit line failures also occurred through creep rupture.

The knit line cracking initiated along the outer diameter of the boss wall, likely the weakest area on the boss because of locally poor fusion. It is significant to note that because many of the bosses exhibited multiple cracks, the fractures were not exclusively associated with knit lines.

The third type of cracking present on the housing bosses occurred through localized molecular degradation of the plastic along the upper mounting surface of the boss. A circumferential ring was present on the mounting surface of many of the bosses that displayed an orange-brown discoloration, and during microscopic examination presented distinctive mud cracking. The mud cracking, in particular, is indicative of localized molecular degradation associated with chemical attack of the molded plastic resin. The form of the cracking was characteristic of a chemical reaction that resulted in significant molecular weight reduction of the polymer on the exposed contact surface. The reduction in molecular weight produced a decline in the plastic material properties, including short-term and long-term mechanical strength. The cracking initiated within the zone of localized molecular degradation, and extended longitudinally through the boss wall.

Based upon analysis, the chemical agent thought to be responsible for the molecular degradation was identified as ferrous chloride. Ferrous chloride is produced as a corrosion product of ferrous alloys, including stainless steel. Aqueous solutions of ferrous chloride are known to produce severe degradation in polycarbonate-based resins.5 A significant level of chlorine was identified within the orange-brown debris present on, and adjacent to, the fracture surfaces. Chlorine-based compounds are known to produce corrosion in stainless steel alloys. Given the configuration, the most likely mechanism is crevice corrosion. However, further evaluation would be required to confirm this.

The observations made during the fractographic evaluation of the failed and as-molded housings were not consistent with overload or impact failures created during a relatively short period of time. Further, no signs of chemical interaction, such as environmental stress cracking (ESC) were apparent.

Melt flow rate testing of the failed housing and as-molded housing materials produced results indicating severe molecular degradation, associated with the injection molding process. Molecular degradation represents the reduction in molecular weight of the polymer, and reduces the mechanical integrity of the molded part, rendering the part susceptible to premature failure. This molecular degradation is thought to be a primary factor in the cracking of the housing bosses. Results obtained during differential scanning calorimetry and thermogravimetric analysis supported the conclusion that the housing materials had been substantially degraded. In particular, the thermogravimetric analysis indicated that the degradation was most likely associated with the polycarbonate phase of the resin blend.