Fractography: Crack Features Can Change as the Crack Propagates

I completed a failure analysis on a safety clip, which had failed an impact test at -30 °C. The parts are specified to be able to withstand the cold temperature impact test, and the failures were of serious concern due to potential safety issues. The parts were injection molded from an unfilled, impact modified nylon 6/6 resin.

The fractographic examination indicated that the cracking initiated through a brittle fracture mechanism, characterized by a relatively high crack propagation rate, and a significant amount of driving energy. In particular, this was characterized by the presence of stepwise-cracking associated with crack bifurcation, as well as secondary cracking. Additionally, the fracture surface within the origin zone showed a very smooth morphology, without micro ductility. The observed features were indicative of a high level of energy within the fracture as it propagated from the origin.  The fracture surface characteristics were consistent with the application of a high strain rate impact load, in agreement with the described testing that precipitated the cracking. Specifically, the observed features were indicative of brittle fracture associated with stresses that exceeded the short-term strength of the material through a high strain rate impact mechanism.

Remote to the crack initiation zone, the fracture surface morphology was significantly different. Outside the crack origin, hackle marks and river markings were evident, indicative of rapid crack extension. With increasing distance from the crack origin, a relative increase in the level of micro ductility was apparent in the form of an overlapping morphology and stretching and deformation. This was important, as it indicated that the material was not inherently brittle.

This fracture surface presented classic features, illustrating how the crack features can change as the crack propagates. The change in fracture surface morphology is often the direct result of a transition in the stress state on the subject part, including load orientation or magnitude. 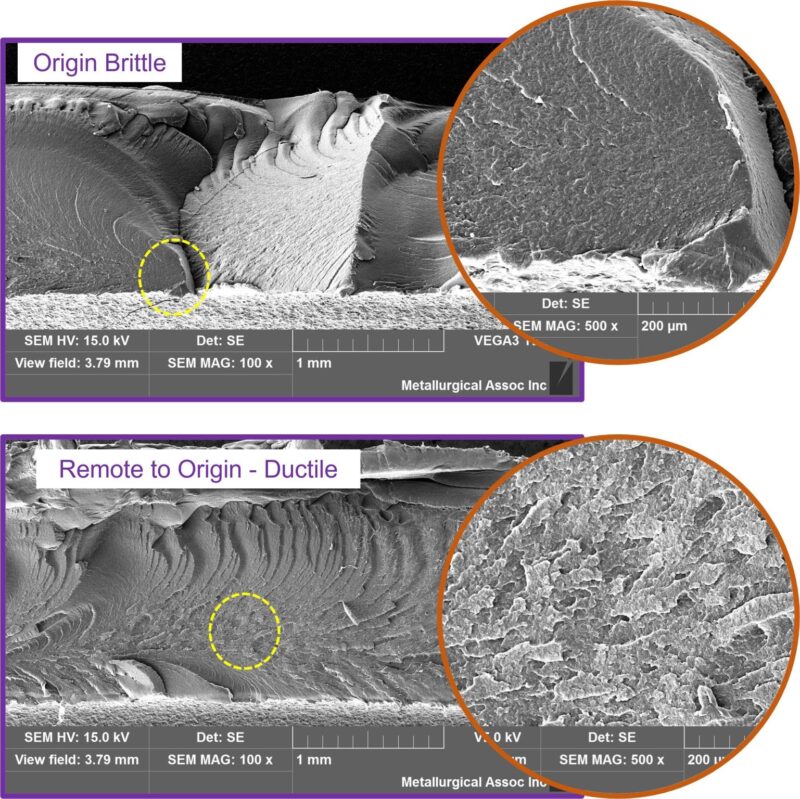