In the first two parts of this series, we examined the underlying chemistry and some of the interesting material properties of polyurethanes. Now we turn our attention to how things can go wrong when using this versatile material. Invariably, whenever problems occur with TPUs or cast polyurethane elastomers the root cause can often be traced back to a misunderstanding or oversight of some aspect of the basic chemistry or the manner in which the molecules are assembled.

Recall that all polyurethane (both thermoplastics and elastomers) molecules are comprised of hard segments (diisocyantes) joined together by soft block segments (polyols). For a cross-linked polyurethane elastomer, these molecules are chemically linked during the processing stage when the isocyanate rich pre-polymer (A-side) is mixed with an appropriate amount of polyol/amine based curative (B-side). In this type of two-part cast system, the components may also be pre-heated before being mechanically mixed and cast into a preform/mold. Ultimately, it is the stochiometric ratio of the A-side to B-side that must be carefully controlled to ensure the mechanical properties of the finished part. For example, the fatigue life of some cast polyurethane materials can be affected by a factor of 10,000 with only a 10% change in the ratio of these two mixed components.

Another factor that affects the end properties of a polyurethane cast system is the post-cure maturation stage. Because perfect mixing of the two components is impossible on a production scale, there will always exist some unreacted species within a cast polyurethane system. Most resin producers provide detailed post-cure recommendations to subject the finished part to an elevated temperature for a specified period of time. While some molders may consider this an inconvenient “option” that unnecessarily prolongs cycle time and increases costs, it does far more than simply relieve residual stresses in the finished part. In fact, the post-cure stage provides the molecules with a certain amount of mobility that both permits further reactions to occur as well as to achieve a more refined (lower energy) microstructure. The resulting effects on the mechanical properties lead to increases in tear strength, tensile strength, creep resistance and heat deflection temperature, among others. This “maturation” of properties will also occur in the absence of heat, albeit at a slower rate. 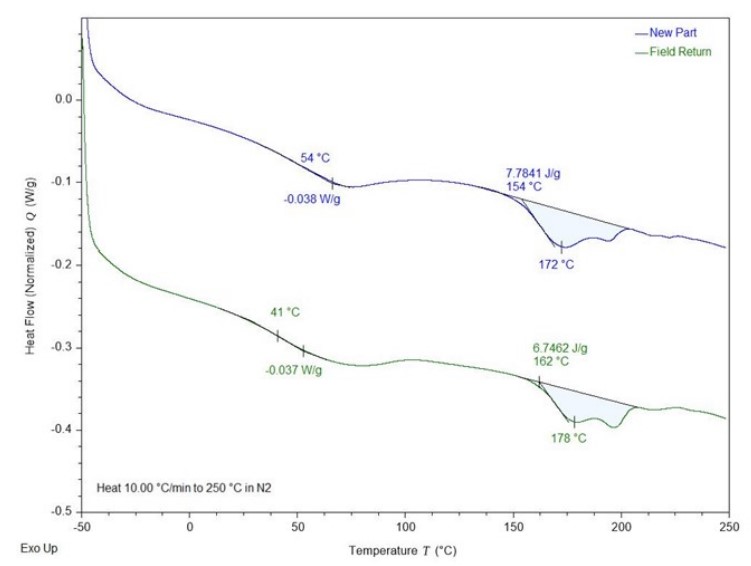 This “cold aging” of polyurethane materials is common in both cast systems as well as with TPU materials. The “rearrangement” that occurs through further cross-linking or crystallization can result in changes in hardness, stiffness or even the glass transition temperature of the material. If these changes take place while the part is in service, they can certainly result in customer complaints or even catastrophic failures. For example, consider the differential scanning calorimetry (DSC) results for a TPU component. The manufacturer began fielding customer complaints regarding the “feel” of new production TPU components. It was found that “old” unused parts that the customer had kept in inventory for several months behaved differently than newly manufactured components. Though nothing had been changed in the material specification or injection molding process, there was a definite material difference between parts from the two eras. DSC testing found that the stored parts had undergone a form of cold aging, which resulted in a decrease of the glass transition temperature (Tg) of 13° C and a corresponding increase in melt temperature (Tm) of 6° C. The physical rearrangement of the TPU molecules that had occurred during storage had actually improved the perceived properties of the part and by implementing a controlled “annealing” step after injection molding, these effects could be realized in new production parts as well. 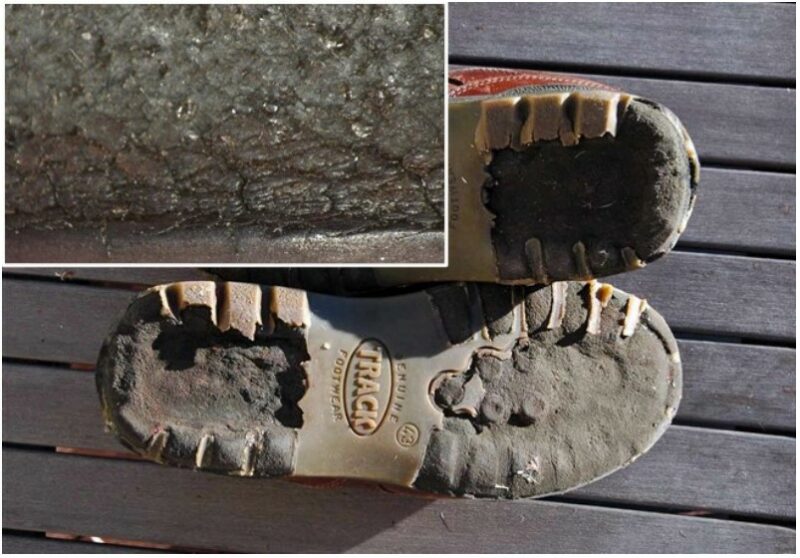 Another overlooked aspect of polyurethane materials is the base chemistry of the building blocks used in its construction. For instance, consider the polyurethane shoe tread material that exhibited severe wear while in use. Since wear appears to be the primary mechanism for failure, the base hardness of the polyurethane material may come into question as the cause of failure. Indeed, an examination of the tread shows a soft, spongy material that is easily removed and torn from the substrate. Yet, the state of the failed shoe tread is quite different from its as manufactured state. A microscopic examination of the wear structure at the polyurethane tread reveals evidence of material flaking, cracking, pitting and deterioration. These effects are visual indicators of material degradation in the polyurethane. To understand the mechanism responsible for this degradation one only needs to review the base chemistry used in the material. 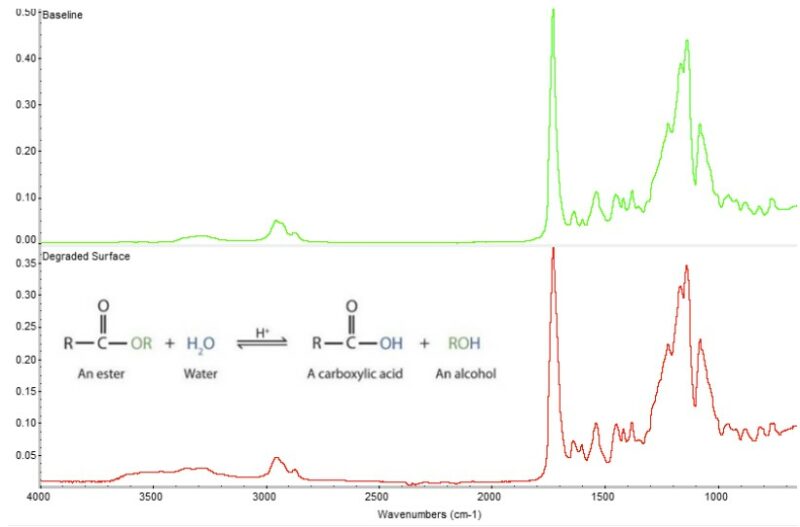 Analytical testing of the shoe material via Fourier Transform Infrared Spectroscopy (FTIR) reveals the polyurethane as an MDI polyester based material. Furthermore, analysis of the spectra shows absorbances that indicate severe hydrolysis within the polyurethane material. This ester-based material has an affinity for water and will readily absorb moisture from the surrounding environment. Over time (and accelerated by elevated temperatures) the water molecules break down ester linkages in the polymer chain to create acids and alcohols. The acid byproducts act as catalysts to accelerate still further, hydrolytic degradation of the polymer chains. The resulting scission at the soft-segment of the polymer chain leads to loss of elasticity, embrittlement, cracking and premature loss of material. Though certain acid-scavenging /anti-hydrolysis additives can be formulated into the material to improve the hydrolytic resistance, they generally provide limited protection by creating barrier layers and/or decreasing the rate of hydrolysis but do not eliminate it entirely. By comparison, a ether-based polyurethane formulation would provide an inherent resistance to hydrolysis effects. However, even an ether-based mated can suffer from hydrolysis in harsh environments such as high-temperature marine applications. Therefore, it is important to properly test any material selected for the end-use environment for the application.

Check out Polyurethanes Part 1 and Part 2.

Bruce Davis is one of the co-founders and current CEO of The Madison Group. Dr. Davis received his Ph.D. from the University of Wisconsin – Madison and specializes in failure analysis, polymer behavior, material evaluation and processing. Dr. Davis leverages his broad knowledge of polymer behavior and the role of processing towards the end use, design, failure, and long-term behavior of a wide variety of polymeric products and components.