Recently, it seems I have worked on a number of failures within O-rings. O-rings are primarily used for sealing, and act as a means for closing off a passageway, preventing escape or loss of a fluid – liquid or gas. Failure within the O-ring can bring severe consequence for the machinery, or even health and safety concerns.

There are several common O-ring failure mechanisms. Some of these are generic to elastomeric components, and others are unique to O-rings.

Explosive Decompression: The seal is marked by random short splits or ruptures going deep into the O-ring’s cross-section. When the O-ring is first removed, the surface may also be covered with small blisters.

Installation Damage: The seal or parts of the seal may exhibit small cuts, nicks or gashes. May exhibit a skinned or peripherally peeled surface.

Abrasion: The seal or parts of the seal exhibit a flat surface parallel to the direction of motion. Loose particles and scrapes may be found on the seal surface.

Extrusion / Nibbling: The seal develops ragged tattered edges, characterized as many small bites or nibbles taken out of the O-ring.

Spiral Twisting: The seal exhibits cuts or marks which spiral around its circumference. O-ring exhibits a series of deep, spiral 45° angle cuts.

Thermal Degradation: The seal may exhibit radial cracks located on the highest temperature surfaces. In addition, certain elastomers may exhibit signs of softening—a shiny surface as a result of excessive temperatures. Often accompanied by the flatness of high compression set.

Chemical Effects: The seal may exhibit many signs of degradation or material alteration including blisters, cracks, voids or discoloration. In some cases, the material change is observable only by measurement of physical properties. Often identified by a marked increase in seal dimensions. 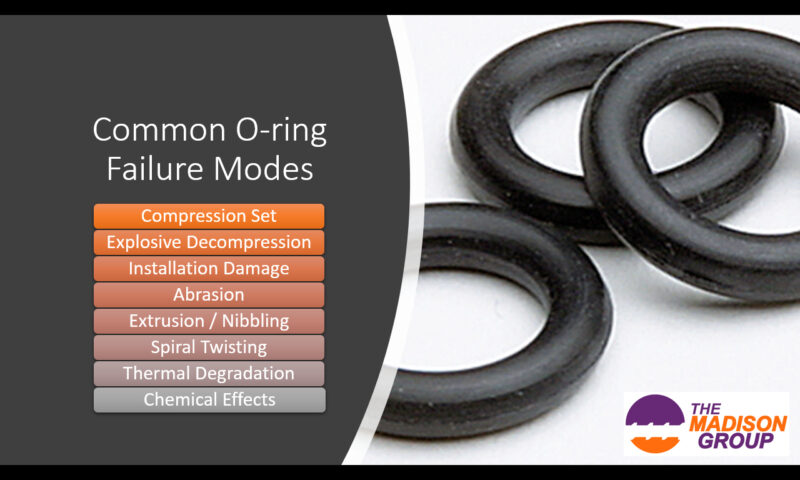